On March 9, John Carter will be in theaters, and so we've got a long time to anticipate how the film will look in comparison to the books. If you're a Barsoom fan, you're probably wondering how the film will do the fantastic series justice.

Indeed, the white apes, the scary creatures that John Carter first battles with upon landing on Barsoom, will be in the film. But will they be the same as they were described in the books?

No. Andrew Stanton reveals that the white apes will be much larger in the film, instead of looking like "oversized gorillas" as they were portrayed in the books. In addition, they will be more present overall in the film, mentioned more, and featured more.

So what do you think? Is Stanton's version of the white ape as good as Edgar Rice Burroughs' or perhaps even cooler? Comment below and let us know! 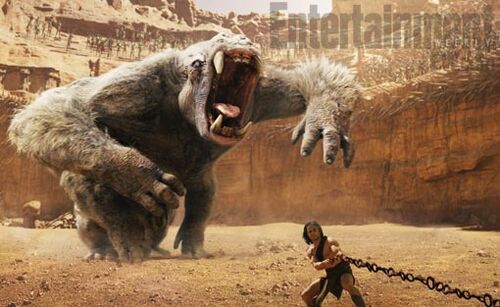 Retrieved from "https://johncarter.fandom.com/wiki/User_blog:LexiLexi/First_Look_at_Fearsome_White_Ape_from_John_Carter_the_Movie?oldid=4454"
Community content is available under CC-BY-SA unless otherwise noted.