For information beyond the film please visit Therns on Encyclopedia Barsoomia 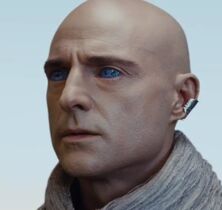 The Therns are a race of shape shifting white beings from the world of Barsoom. They control the planet from the shadows.

They are lead by a Holy Hekkador, the current one being Matai Shang. Using their advanced technology, the mysterious Therns represent themselves as the messengers of Issus, the Barsoomian Goddess, in order to further their own plans.

Therns are shown to have frighteningly powerful abilities such as shapeshifing into a variety of beings such as Tharks, Warhoons, Red Martians and Earthlings. They also have control over the mysterious blue energy known as the Ninth Ray which they can use for a variety of uses. Such as forming constructs made from solid energy such as blades, inject it into peoples bodies that will either kill them or control them, or a more deadly use is to fire it like a beam and causes anyone who is hit to dissolve into nothing. Their other powers include some mild form of telekinesis and some sort of mental telepathy that can allow them to communicate with each other over great distances and being able to communicate with any species, even the Warhoon.

The Therns have incredibly advanced technology, which they access with their medallions. They can use them for many purposes, the most amazing of which is being able to instantly teleport to any location on Barsoom or to any other planet in the solar system such as Earth.

Retrieved from "https://johncarter.fandom.com/wiki/Therns?oldid=6002"
Community content is available under CC-BY-SA unless otherwise noted.